30 October 2021
West Deeping Roadshow - ‘Food for Thought'
Six Shoestringers (pictured right) entertained about sixty people at St Andrew’s Church fundraiser in West Deeping. Falling on the eve of the Harvest Festival, sketches mainly centred around food, including Macbeth’s witches do the Great British Bake Off, Alice in Wonderland, Office Party regrets, an Ode to a Pork Pie, Entertaining Problems, and a musical finale. Performers included some of Shoestring’s newest and long-standing members, providing a great opportunity to get to know one another better and a have fun time rehearsing, performing and supporting the community.

"Thanks again so much to you and your team. We loved having you! Thanks for being so willing from the start, and also for the generous gift of your performance: very much appreciated.” West Deeping PCC

19th May 2021
Our second online Zoom film was based on extracts from Ariel Dorfman's play Widows, was streamed at the launch of the Stamford and Rutland Social Justice Festival.

26th March 2021
The first of our lockdown Zoom plays, extracts from Dylan Thomas' Under Milk Wood, was filmed and streamed to members .

December 2019
Just wanted to congratulate all those involved with the production of Blue Stockings! We saw the show last night and were absolutely riveted by the story, acting and singing of the cast. It was a flawless performance and so thought provoking (and entertaining!) We just wished that our graduate daughters had also come along to see it and to see the fight that the women had (and how long it took) for them to enjoy a university education. We talked about it all the way home.
Absolutely fantastic! Well done to the Shoestring Company, we’re looking forward to next year’s productions!
A Member of the Audience 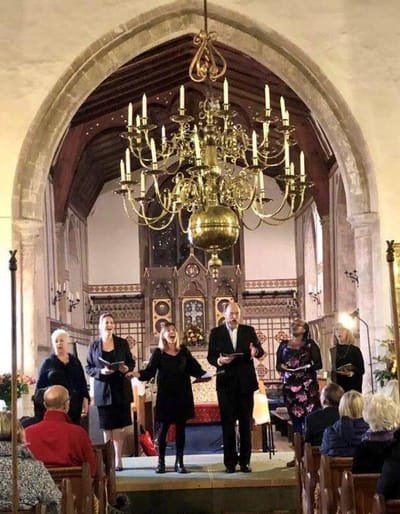